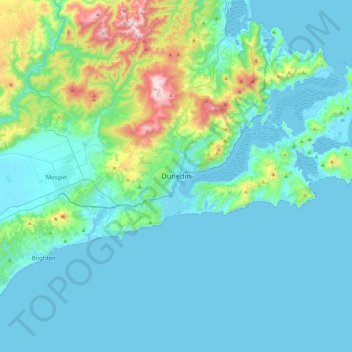 The climate of Dunedin in general is temperate. The city is recognised as having a large number of microclimates and the weather conditions often vary between suburbs mostly due to the city's topographical layout. Under the Köppen climate classification, Dunedin features an oceanic climate. The city's climate is also influenced by its proximity to the ocean. This leads to mild summers and coolish winters. Winter is not particularly frosty with around 49 frosts per year, lower than most other South Island locations, but sunny. Snowfall is not particularly common and significant snowfall is uncommon (perhaps every two or three years), except in the inland hill suburbs such as Halfway Bush and Wakari, which tend to receive a few days of snowfall each year. Spring can feature "four seasons in a day" weather, but from November to April it is generally settled and mild. Temperatures during summer can reach 30 °C (86 °F). Due to its maritime influence, Dunedin's mild summers and mild winters both stand out considering its latitude.